As far as I’m concerned, most of 2019’s most exciting releases were stacked near the beginning of the year (not that I’ve had a chance to read many of them yet), but that doesn’t mean there aren’t still things to look forward to! Most of these aren’t things I’ll be rushing to buy as soon as they come out, but here’s what I’ll be looking out for in June, July & August this year:

[All dates are taken from Amazon UK unless stated otherwise, and are correct as of 31/5/2019.] 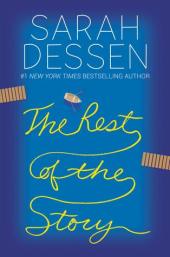 The Rest of the Story by Sarah Dessen (4th June)

A contemporary about a teenager called Emma who’s spending the summer reconnecting with her mother’s estranged family. I’m expecting self-discovery, a cute romance with childhood-friend Roo, and a heartwarming (or heartbreaking, or maybe even both) storyline… Contemporaries (and YA contemporaries in particular) have become less and less my thing over the last couple of years, but Sarah Dessen (almost) always manages to get to me, so I’m looking forward to reading this sometime this summer. 💕 Excitement level: 7/10

A sci-fi adventure featuring an accidental runaway, a girl who blows up asteroids for a living, and trouble with space pirates! I was burned by Landers’ last sci-fi novel (Starfall, sequel to the amazing Starflight), so I’m feeling a little cautious about this one, but it sounds like a lot of fun regardless. Excitement level: 5/10

To Be Taught, if Fortunate by Becky Chambers (8th August)

A standalone novella from the author of The Long Way to a Small, Angry Planet set in a future where humans have developed the technology to adjust their bodies to survive in deep space, and main character Ariadne is on a mission to investigate distant planets for signs of life… From the sounds of it, this is going to be a pretty introspective story, exploring the isolation of space travel, and, of course, space itself – all of which were things I loved about The Long Way to a Small, Angry Planet. So I’m feeling pretty hopeful! 😊 Excitement level: 7/10

Happy New Year! In the final month of 2018, I am pleased that my intense desire to read all the time remained strong (despite the shocking realisation that the single-player mode in the new Smash Bros. game is actually fun 😱), and so I managed to get through 7 manga volumes, 6 novels, 2 audiobooks, 1 novella, 1 picture book, and 1 data book! 😁 Here’s what I thought of them all: