Happy New Year! In the final month of 2018, I am pleased that my intense desire to read all the time remained strong (despite the shocking realisation that the single-player mode in the new Smash Bros. game is actually fun 😱), and so I managed to get through 7 manga volumes, 6 novels, 2 audiobooks, 1 novella, 1 picture book, and 1 data book! 😁 Here’s what I thought of them all:

With autumn soon coming to an end, Penguin is launching the aptly-named Fall Into Fantasy readathon, which will run from 18th-25th November, and challenges us to read at least four fantasy novels over the course of the week. There are more specific challenges as well, of course (which I’ve used to tailor my reading list), as well as a 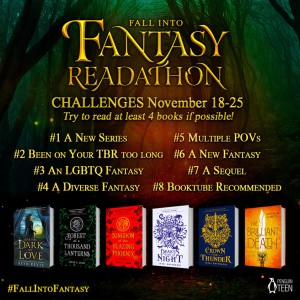 collection of official buddy reads (which I haven’t; some of the books do look interesting, I just don’t have any of them…), all of which can be found on Penguin’s site (linked above), and in the infographic to the right. 👉

And a second readathon will also be going on at the same time: The Tome Topple readathon, which is all about reading big books – 500 pages or more – will be on from 16th-29th November. And since fantasy books tend to be more chunky than not, I think these readathons go together perfectly! 🎶 I won’t be jumping into this one from the start, as I have a couple of shorter things I want to finish off before I get carried away to fantasyland, but if I’m still in as much of a reading mood after #FallIntoFantasy as I am now, I’ll definitely be picking up a(nother?) tome to finish before the 29th. 😊

Here’s what I’ll (probably) be reading:

1) Sorcerer to the Crown by Zen Cho. The first book in the Sorcerer Royal series, which tells the story of Zacharias Wythe, former slave and distinguished sorcerer, who sets out on a journey to Fairyland in order to find out why magic seems to be running out. I’ve been getting serious Jonathan Strange & Mr. Norrell vibes from this book since I first heard of it, but I’m hoping that it will be a little more accessable, by virtue of being about a quarter of the length. 😋 This book will tick off challenges #1 (a new series), #2 (been on my TBR too long) and #4 (a diverse fantasy).

2) The Dark Prophecy by Rick Riordan. The second book in Riordan’s Trials of Apollo series, which takes place in the same universe as the Percy Jackson books, but follows the god Apollo, who is transformed into a human teenager as punishment for annoying his father – the king of the Greek gods, Zeus – one too many times. Apollo is canonically bisexual, so this is (shockingly) the only fantasy I own (and haven’t read yet) that could possibly satisfy challenge #3 (and LGBTQ fantasy), but it will also do for #7 (a sequel), and is another contender for challenge #2 – though, to be honest, I could say the same for pretty much any of these… 😅

3) A Court of Wings & Ruin by Sarah J. Maas. The third book in the A Court of Thorns & Roses series, and the conclusion to Feyre’s storyline, I believe. I’ve been somewhat nervous about picking up any of Maas’ books since reading Queen of Shadows, so this has been lingering on my TBR for a while, but I am cautiously optimistic about it, as I really enjoyed the last book in this series… 🤞 This book will fulfil challenges #2, #7, and #8 (Booktube recommended).

4) The Smoke Thieves by Sally Green. Last but by no means least is the first in a new series by one of my favourite new authors of the last few years! I don’t know much about the story of this one, but I do know that it’s a high fantasy (as opposed to Green’s previous urban fantasy trilogy), follows four different protagonists, and was released earlier this year – thereby completing the last two challenges, #5 (multiple POVs) and #6 (a new fantasy). 🎉

A Court of Wings & Ruin will also count for the Tome Topple readathon, as it’s well over 500 pages, and although The Smoke Thieves isn’t, I’m still going to include it, as 494 pages is awfully close… Some of the other tomes that I might pick up when my fantasy sprint is over are: The Angry Tide by Winston Graham or Harry Potter & the Goblet of Fire by J.K. Rowling, both of which I’ve already started on, but still have well over 500 pages to go, or perhaps Life After Life by Kate Atkinson – something I’ve been meaning to read for years now… 😓