I can’t seem to find (and therefore credit) the person who created this tag, but I was tagged by The Quirky Book Nerd (who has a wonderful blog that you should all check out) – much to my delight! 😀 I’ve had my eye on this tag for a while now (it seemed super-fun), and had actually been planning on doing it soon whether I was tagged or not. It is, however, always nice to be tagged~ 🙂 I hope you enjoy it!

1) Find a book for each of your initials.

Flambards by K.M. Peyton
Mortal Engines by Philip Reeve
Sabriel by Garth Nix
The Son of Neptune by Rick Riordan
The Woman Who Rides Like a Man by Tamora Pierce

2) Count your age along your bookshelf – what book did you get?

I’m 26, which (discounting my shelves for study guides, comics and manga, which I usually try not to use for tags) lands me right in the middle of my miniature section of Children’s Classics, where I ended up with A Little Princess by Frances Hodgson Burnett.

3) Pick a book set in your city/county/country.

I don’t think I’ve read any books that are set in Cambridge itself, so instead I’ll go with The Devil & His Boy by Anthony Horowitz, which is at least set in England (and is also a really great book that I don’t mention much!).

4) Pick a book to represent a place you’d like to travel to.

Can I pick the moon? I’d love to go to the moon. Fairest by Marissa Meyer. 😉

My favourite colour is orange, which isn’t the most common colour for books… I do own a couple, though, and one of them is My Grandmother Sends Her Regards & Apologises by Fredrick Backman, which has a lovely shade of orange on the spine, in particular. 🙂

6) What book do you have the fondest memories of?

The Hobbit by J.R.R. Tolkien. My love of fantasy was seeded in me early on in life – my dad used to read this book to me and my sister before bed when we were both little.

7) Which book did you have the most difficulty reading?

Probably A Dance with Dragons by George R.R. Martin, which I carried around in my purse for several months before I finally managed to finish it (I remember it clearly: I constantly had a very sore shoulder from the weight of the book, and I also ended up mangling the dust jacket…

). It wasn’t just that the book was long – I made it through the rest of the series easily enough, and they’re all super-long, too – but most of the book was taken up with either Daenerys or Jon Snow chapters, and they’re my least-favourite POV characters in the series.

8) Which book on your TBR will give you the biggest sense of accomplishment to have finished?

Either Cloud Atlas or The Bone Clocks by David Mitchell. These two have been sitting on my TBR shelf for a while now, because although I like David Mitchell’s writing, I also find it quite tough to get through. So, yeah, I’ll be pretty proud when I finally manage to finish these. 🙂

I didn’t post a book haul in August, not because I suddenly developed a modicum of self-control, but for the exact opposite reason: I bought so many books that I couldn’t bring myself to look at them all together and not feel a bit embarrassed. 😳 I am comforted, however, by the fact that I’ve already read almost all of these, so that’s something…

Anyway, I bought most of these in the lead-up to the Booktubeathon, after which I put myself on a strict book-buying ban – which I managed to keep to (mostly), even if I’ve taken myself off it now. 🙂 Here’s what I bought: 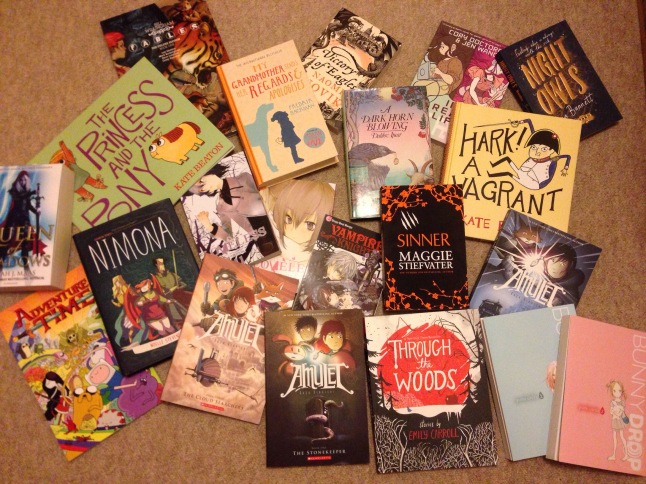 1) My Grandmother Sends Her Regards & Apologises by Fredrik Backman. I’d had my eye on this for a while, but what made me finally decide to buy it is the fact that it’s signed! I don’t really know what it’s about, except grandmothers, and possibly also superheroes.

2) Loveless, Volumes 11-12 by Yun Kouga. The latest two volumes in the Loveless series, which is about magic and murder and catboys, and is a lot of fun, though a little on the weird side. Fun fact: I read these not long after I bought them, and (somehow) only realised afterwards that I still haven’t read volume 9 or 10. 😳

3) Vampire Knight, Volume 11 by Matsuri Hino. The next volume I needed to read in the Vampire Knight series, which follows a girl whose duty is to keep the peace between the human and vampire students at her school.

4) Sinner by Maggie Stiefvater. The sequel to the Wolves of Mercy Falls books, which I read a couple of years ago and loved. I wanted to read this as soon as I realised it was going to be a thing, but I’ve been waiting for it to be released in paperback…

5) Victory of Eagles by Naomi Novik. The fifth book in the Temeraire series, which I mainly picked up because I spotted it in the edition that I’ve been trying to collect. The books have all been re-released recently with new covers, so it’s getting increasingly difficult to find these editions…

6) Bunny Drop, Volumes 1-2 by Yumi Unita. The beginning of the Bunny Drop series, which I finally decided to read after about the third time watching the anime. A really cute story about a man who ends up raising his grandfather’s illegitimate daughter.

7) Fables, the Deluxe Edition: Book 1 by Bill Willingham. I bought book 2 of this series sometime this summer, so I picked this up when I was in London, since it was on special offer, and I wanted to – if not complete, then at least fill in the gap in my collection.

8) Hark! A Vagrant by Kate Beaton. A collection of hilarious short comics from the webcomic of the same name. I bought this, and the next 3 books, using the Booktubeathon 100 books discount.

9) Nimona by Noelle Stevenson. A cute graphic novel about a supervillain and his sidekick, Nimona. I’d been on the fence about buying this for a while, but I’m really glad that I did!

10) In Real Life by Cory Doctorow & Jen Wang. Another cute graphic novel about a girl who plays MMORPGs.

11) Through the Woods by Emily Carroll. A collection of short horror stories in graphic novel format. Truly chilling – I will probably be re-reading this when Halloween rolls around. 🙂

13) The Princess & the Pony by Kate Beaton. I saw this on buy-one-get-one-half-price at Waterstones, and I couldn’t pass it up, even though I don’t usually read picture books. The tale of a warrior princess and her flatulent pony – by the same author as Hark! A Vagrant!

14) Night Owls by Jenn Bennett. A contemporary romance that I picked up on a whim, as the other half of that buy-one-get-one-half-price offer I just mentioned. And I’m super-glad that I did. This is probably one of my favourite books of the year so far. 😀 (Also called, in some places The Anatomical Shape of a Heart.)

15) Queen of Shadows by Sarah J. Maas. The fourth book in the Throne of Glass series, which I picked up on release day because I’ve been so excited to read it for such a long time. It didn’t quite live up to my expectations, but it was still pretty good! And now, of course, I just need to read book five~ 😉

16) Amulet Volumes 1-3 by Kazu Kibuishi. A graphic novel series about a brother and sister who find a doorway to another world in their house. I’d heard a lot of good things about this series, so when the first three volumes showed up at Oxfam, it didn’t take much to convince me to buy them…

17) A Dark Horn Blowing by Dahlov Ipcar. Another one from Oxfam, though this one I’ve heard absolutely nothing about. It appears to be a fantasy novel, though, and sounds really, really intriguing. I hope to be reading this very soon.