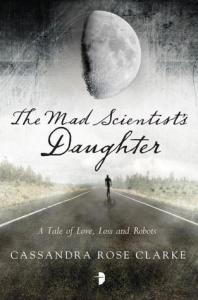 Cat Novak grows up in the aftermath of an event that’s only known as the Disaster, in which millions of humans were killed, and after which millions of robots were created to help rebuild. Homeschooled and with no close neighbours, Cat’s best friend is Finn – a unique, super-advanced robot whom her father has re-programmed to be her tutor – and as she grows older, her feelings for him only become more complicated… but can a robot, even one as advanced as Finn, ever be capable of returning her feelings?

What I was expecting from this book was a cute (though maybe a little sad) romance between a robot and a teenage girl; something in line with Clarke’s The Assassin’s Curse series – the only other books of hers that I’ve read. What I got was something much deeper, much heavier, and much more complex. Rather than cute-but-sad, The Mad Scientist’s Daughter was simultaneously heartwarming and heartbreaking, and unlike The Assassin’s Curse, it was very clearly not aimed at younger readers. This last point would probably have been less of a surprise to me if I’d investigated the book a little more before deciding to read it, but I saw the words “Cassandra Rose Clarke”, “love” and “robots” on the same cover, and let my imagination have free reign from there. A mistake? Possibly. But I do enjoy having my expectations defied – and in this case, far surpassed.

This is very much a character-driven story, and Clarke’s done a really great job of creating a cast of characters who were all beautifully – and realistically – flawed. Even though at times I didn’t particularly like Cat, I always felt that I could understand why she was behaving in the way she was (even when her reasoning was somewhat faulty), and the relationships she formed with the people around her were wonderful. I really enjoyed how close she became to her father as she grew up, and the way that she and her mother continually failed to understand one another (despite loving each other) was heart-wrenching.

And, of course, there was also Finn, who constantly struggles with his own sense of identity and purpose, as well as his desires. Later on in the book, Cat has a chance to finally find out about Finn’s origins, and what she discovers is both incredibly sad and incredibly fascinating. I loved the way that Finn’s friendship altered Cat’s worldview throughout the book; first leading her to get into a fight with a boy at school who calls robots abominations, then influencing her choice of topic for her thesis, and later on leading to her involvement in the Automaton Defense League (a pro-automaton rights group)… but at the same time there’s something of a disconnect between the things that she believes about Finn and the way that she behaves towards him.

Richard was an interesting character, too, and I had a lot of very conflicted feelings about him. Don’t get me wrong, I’m really glad that he exited Cat’s life at the point that he did, but I also think that he and Cat were both in some way to blame for everything that went wrong in their relationship; Cat was as much the villain of Richard’s story as Richard was the villain of hers…

The exact setting of the story is rather vague, both in terms of location (somewhere in America) and time (futuristic, but not so much so that the world seems unfamiliar), but I found that this mattered very little, because it’s not really a story about living in a distant future; it’s a story about people, and people will always be people wherever – or whenever – they are. If Clarke hadn’t wanted to write about robots, then The Mad Scientist’s Daughter could just have easily been set in America at the beginning of the Civil Rights movement, or even in ancient Rome without being any different in essentials… by which I mean that the although the book’s setting is futuristic, the issues it deals with are both timeless and universal.

Overall: Powerful, thought-provoking, and superbly written. I have no doubt that this is a story that I’ll still be pondering for quite some time, and it’s well-deserving of all the thought that I can give it.

EDIT (3/1/2018): Bumped up from 4 stars to 5, after further consideration. Also one of my favourite books of the year, even over some really solid 5-star books.