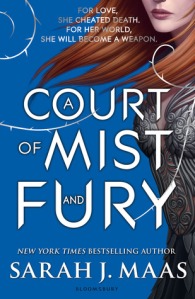 [Warning: This is a spoiler-free review, but I will be referencing some events from A Court of Thorns & Roses, so if you haven’t started the series at all yet, beware.]

Feyre has broken the curse on the Spring Court, and is free to return to it with her lover Tamlin, the High Lord. Nothing now stands in the way of her future happiness… except for the possibility of an impending invasion… and the pesky deal she made with Rhysand, the powerful and greatly-feared High Lord of the Night Court, in order to save her own life. But her time Under the Mountain has altered Feyre both physically and mentally, and the dreams she once held so dear may turn out not to be what she truly wants any more – or needs.

What this book does well: It builds on the world of Prythian excellently; large groups of new characters are introduced, and they’re all well-developed, with their own backstories; the overarching plot of the series escalates brilliantly, and the writing (especially in the second half) does a great job creating a dramatic, tense atmosphere; and of course the romance, which comes across as much deeper and more convincing than in the first book.

What it doesn’t do so well: This seems to be something of a trend with Maas’ books, but many of the supporting characters from the previous book are just thrown by the wayside in A Court of Mist & Fury, or – even worse – altered entirely. This book also completely breaks away from the Beauty & the Beast mythos, which isn’t necessarily a bad thing in itself (after all, the story Maas is telling seems to be a much more intricate and engrossing one than simply girl-falls-in-love-with-monster-and-makes-him-a-man), but the way that it’s done really begs the question, why even bother using Beauty & the Beast as a springboard, if you’re then going to turn around in the next book and undermine the entire message of that story? (I can’t be the only person who felt this way, right?)

(Also, the first half of the book was really slow, but that’s a minor complaint next to the other two.)

A Court of Mist & Fury is superior to A Court of Thorns & Roses – a book that I enjoyed reading (you can find my initial thoughts on it in my review), but had more issues with the longer I thought about it – in every way that I can think of. I really, really liked this book, despite my reservations over it, and I remain anxious but hopeful about A Court of Wings & Ruin, which is slated for release this spring.