This month’s challenge was to read a book with coloured page edges. Sprayed edges, I believe is the technical term (don’t quote me on that). The first book I stumbled across at the library was The Tattooed Heart by Michael Grant (which had the pages sprayed a wonderful bright red colour), and – reading the blurb – I was actually warming up to the idea of it being my pick for the month… until I realised that it was the second book in a series.

Luckily for me, though, the first book was sitting right next to it, sprayed black, so my September pick was… 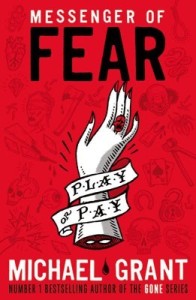 Mara wakes up surrounded by a mysterious mist, remembering nothing of how she got there, or even who she is (beyond her name). When the mist clears, she meets an old/young man who calls himself the Messenger of Fear, and what follows is a dark, introspective journey in search of both Mara and Messenger’s true natures.

I was really looking forward to reading this, but I have to confess that I found it rather underwhelming. The pacing was slow, and much of the book felt like padding for a barely-there story that was more like a prologue than anything else; an intriguing prologue, but a prologue nonetheless. The novel also talked a lot about bullying, and I found it interesting that the two primary cases that the book dealt with were shown from multiple perspectives – the bullies, the victims, and the (relatively) outside viewpoints of Mara and Messenger – but in trying to show every side of both cases, much of their complexity seemed glossed over, the people involved becoming archetypes rather than actual characters…

The book was, however, interesting, and I feel that if it had been a bit longer, and the characters a bit more fleshed out, I probably would have enjoyed it more. It does also set a rather promising groundwork for the series to build on, but I’m not entirely decided on whether or not I’ll be continuing on.